"No abnormalities." This is the reassuring conclusion of the current series of tests carried out by ifw Jena on the district heating pipes of Stadtwerke Energie Jena-Pößneck. Every four years, the employees in the materials testing laboratory of ifw Jena examine the Jena district heating pipes for possible changes in the steel used. The aim is to detect any material damage at an early stage and to be able to initiate any necessary repairs in good time.

"We are very happy about the long-standing cooperation with ifw Jena," says Bernd Heinemann, Head of District Heating at Stadtwerke Jena Netze. "Our district heating network was built in the 1970s and 1980s, so some pipes have been in operation for almost 50 years. The materials testers from ifw Jena regularly provide us with sound findings on the fact that the steel pipelines installed back then are still working safely and reliably." About every four years, 35 fixed measuring points are tested at nine different points in the district heating network. Since the material testers can only examine pipes that are accessible to them, these monitoring points are primarily located on the above-ground routes in Paradiespark, Winzerla and Lobeda, as well as underground in the accessible pipeline ducts.

"It always starts with a visual inspection for rust and other external changes," explains Christoph Weidig from ifw Jena. "This is followed by a fixed measurement program that checks the steel pipes for special material properties." For example, the circumference and cross-section of the pipes are recorded with millimeter precision to detect possible deformations of the steel. Insulation and thermal conductivity are tested with a special surface thermometer. Ultrasound is used to measure the thickness of the steel shell. "Here we want to rule out the possibility that rust may be clogging the pipeline shell from the inside," says Weidig. And last but not least, the SonoDur-3, a special device for mobile hardness measurement from the FOERSTER company, is used, which in turn can be used to check the stability of the steel pipes used.

"It is interesting that very different materials were used in the different sections of the pipeline in Jena," explains Christian Straube, head of the materials testing laboratory at ifw Jena. "Because the installation period in some cases dates back so far, we cannot refer to existing nominal values for the respective material in our materials testing. But we do see changes and can point out deviations from the expected to the municipal utilities. Fortunately, this has rarely been necessary so far."

The long-term study with ifw Jena is part of a broad-based monitoring program on the condition of Jena's district heating network that relies on a variety of methods. Other measures include, for example, camera inspection of pipelines, flying with thermal imaging cameras and the use of electronic leak warning systems. "The topics of supply security and network stability are at the top of our agenda," emphasizes Bernd Heinemann from Stadtwerke Jena Netze. "We do a lot in this area - and yet we are not completely immune to accidents like the one in Jena-Nord last February. However, thanks to our regular investigations and the broad database that we have also built up with the help of ifw Jena, we detect most weak points before any damage occurs." 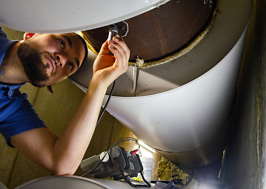 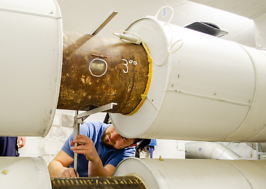 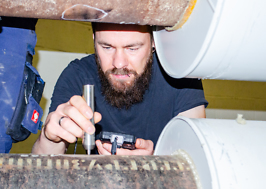 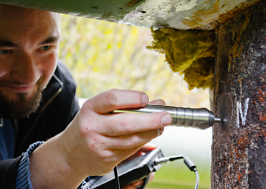 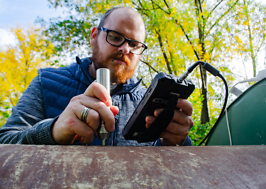